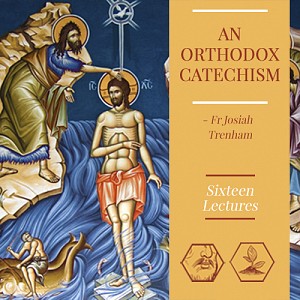 A broad introduction to Orthodox Christianity designed to expose the catechumen to the contours of Orthodox faith and life, aid priests in preparing catechumens to be received into the Church as well as edify Orthodox individuals seeking a better understanding of their faith.

For those seeking to become Orthodox, Catechism is a process of full-orbed Christian formation in which the Orthodox Christian life is inculcated in the learner through participation in divine services, prayer, study, community assimilation, and practice. At the heart of the catechetical process are the catechetical lectures delivered to the catechumens by the priest or the catechist.  It is toward this goal of providing a usable introduction to Holy Orthodoxy that the sixteen lectures entitled An Orthodox Catechism have been developed by Father Josiah. This series has been utilized by Father Josiah in parish practice over the course of almost two decades to prepare more than 400 catechumens for reception into the Orthodox Church.

Not having an official Orthodox Catechism in the English language, many parishes and pastors scramble to put together a basic catechism that will adequately expose the inquirer and catechumen to the contours of Orthodox faith and life.  It is hoped that this series will aid priests and parishes in preparing catechumens to be received into the Church, as well as edify Orthodox individuals seeking a better understanding of their faith.

These sixteen lectures are presented to catechumens in two parts. Part One: God, Man, Church is traditionally delivered over the eight weeks leading to the Feast of the Nativity of Christ. Part Two: The Holy Mysteries is delivered over the eight weeks leading up to Pasha, when catechumens are being prepared for reception into the Church on Great and Holy Saturday.

Part 1 / Lecture 5: Jesus Christ, the Savior of the World

Part 1 / Lecture 8: The Church and the Mother of God

Part 2 / Lecture 3: The Mystery of the Holy Eucharist

Part 2 / Lecture 5: The Mystery of the Holy Priesthood

Part 2 / Lecture 8: The Mystery of Death & the Funeral