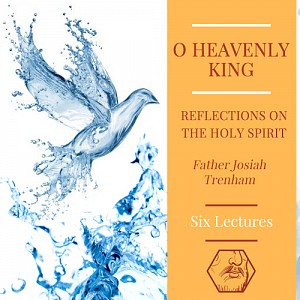 This series explores the person and work of the Third Person of the Holy Trinity. His person is so often veiled to the understanding of believers since He works to make known and to glorify both God the Father and His Son, our Lord Jesus Christ. Life in the Holy Spirit, however, is the very basis of Christian living and the very core of the Church. Acquiring the Holy Spirit in increasing measure is the path to the Kingdom of God, and in these lectures believers may learn the place of the Holy Spirit in the Life of the Trinity, the Church, and the World.

Lecture 6: The Holy Spirit and the Mission of the Church to the World

Lecture 1: The Holy Spirit as a Divine Person

Lecture 2: The Holy Spirit in Creation and Re-Creation

Lecture 3: The Holy Spirit, Pentecost and the Miracle of the Church

Lecture 4: The Holy Spirit and the Christian Life

Lecture 5: The Holy Spirit and the Divine Mysteries 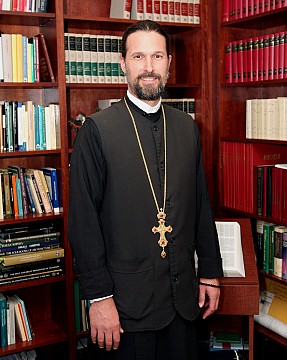 FATHER JOSIAH TRENHAM is a native Southern Californian. He was ordained to the Holy Priesthood in 1993, and was awarded the Ph.D. in Theology from the University of Durham, England, in 2004. He has served as pastor of St. Andrew Orthodox Church in Riverside, Ca. since 1998.

Father is the founder and director of Patristic Nectar Publications, a company dedicated to “nourishing the spiritually thirsty with the sweet teachings of the Holy Fathers” in quality audio recordings. PNP produces both recordings of patristic works as well as recordings of lectures and homilies available in direct download formats (www.patristicnectar.org). Father Josiah’s weekly homilies and additional theological reflections are published weekly and listened to by thousands all over the globe on The Arena podcast on Ancient Faith Radio:  www.ancientfaith.com/podcasts/thearena.

Father serves as an instructor in and on the Board of Advisors of the Ss. Cyril and Athanasius Orthodox Institute in San Francisco: www.sforthodoxinstitute.org. He is an adjunct professor of theology at St. Katherine College in Encinitas, Ca. (2010-present), and was an Adjunct Professor of History at California Baptist University (2003-2010). He is a member of the Orthodox Theological Society of America, and participates in yearly academic forums and symposia. Since 2004 he has served on the Mayoral Environmental Committee (GAP) of the City of Riverside. Father Josiah has also served as a member of the Secretariat of the Assembly of Orthodox Bishops in the United States since its inception in May, 2010. Father Josiah was married in 1988, and has ten children.