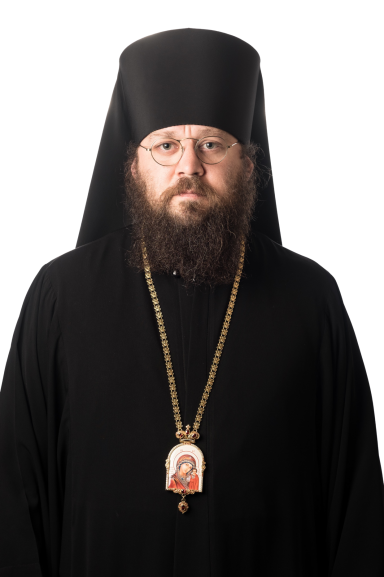 HIS GRACE IRENEI was appointed Bishop of London and Western Europe by decision of the Holy Synod on 7th / 20th September 2018. Previously he had been Bishop of Sacramento, Vicar of the Western American Diocese, and had served as Administrator of the Diocese of Great Britain and Ireland from 2017.

Previously His Grace served as the Dean for Monastic Life of the Western American Diocese of the ROCOR (appointed 2012); and continues to be a member of the Education Department of the ROCOR (appointed  2014); and of the Synodal Biblical and Theological Commission of the Moscow Patriarchate (appointed 2016). In 2012, the new Sts. Cyril & Athanasius Institute for Orthodox Studies began operation with the blessing of the Holy Synod, with then-Archimandrite Irenei as its director, and which he operated until the time of his episcopal consecration (thereafter handing it over to a permanent administration). From 2012-2018 he served on the Secretariat of the Assembly of Bishops of the United States, and worked in close cooperation with hierarchs of the ROCOR and the Moscow Patriarchate in matters relating to the Episcopal Assemblies and other inter-Orthodox contexts. From 2014 he assisted in the founding of the new men’s monastery in Sonora, California, dedicated to the memory of St Silouan of Mt Athos, and at the official foundation of the monastery on the Saint’s feast day in 2015 was appointed its Abbot, which role he retained until departing for the European territories in 2019.

Bishop Irenei served for seven years as an Archimandrite at St Tikhon’s Church in San Francisco: the former home and orphanage of St John the Wonderworker of Shanghai and San Francisco, and was consecrated to the Episcopacy before the relics of St John on the feast of the Theotokos, ‘Joy of All Who Sorrow’ in November 2016. In his academic life Bishop Irenei (who is a professor of theology and was sometime fellow at the University of Oxford and chair of Theology and Religious Studies in Leeds) has focused chiefly on the theology and spirituality of the Holy Fathers, together with Orthodox liturgics and ecclesiology; and in parish life he has been particularly dedicated to youth in the Church, to his role as a Confessor, and to the spiritual and liturgical formation of parish life.